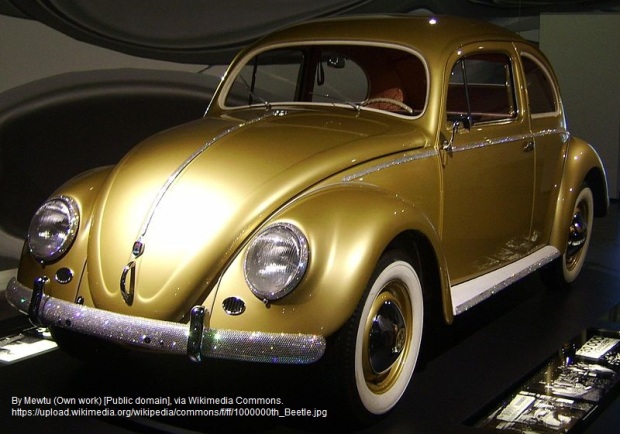 The Volkswagen Beetle was symbolic of Germany’s postwar resurgence as an economic and industrial power.  This example is the one millionth Beetle, built in 1955.

The Wirtschaftswunder—a German word that translates literally to “economy miracle”—saw the astonishing rise of a strong Germany after defeat in an incredibly destructive war.  Both the implementation of the Marshall Plan and introduction of the Mark as the currency in West Germany helped West Germany get back on its feet fiscally.  The strengthening economy created a need for labor.  At this point, Sebastian Braun and Toman Omar Mahmoud argue, the Heimatvertriebene who had had a temporary “displacement effect” when they had arrived “provided an important labor reservoir for the booming postwar industry.”[1]  Other foreign nationals seeking work came to the FRG in the 1950s and onward, mainly to provide unskilled labor in industrial settings.  In 1955, Germany signed a recruitment agreement with Italy, allowing Italians to come work in Germany as guest workers (Gastarbeiter).  Many of these Italian migrant workers came alone, without their families and with the hope of returning to Italy as soon as possible.[2]  The 1960s saw more recruitment contracts for foreign guest workers, first from nearby nations including Spain and Greece, and then moving outward to Turkey, Morocco, Portugal, Tunisia, and Yugoslavia.

While these guest workers represented large numbers of people moving into West Germany during a time of prosperity, their role was a temporary one—at least in principle.  When the rise of the Iron Curtain stopped East German workers from entering into West Germany, foreign guest workers became especially important in West Germany.[3]  This trend was perhaps not readily apparent when a recession hit the FRG in 1966, and about 300,000 guest workers lost their jobs. [4]   Yet, as soon as the economy picked up again, so did the demand for guest workers.[5]

Although the foreign guest workers in the FRG were important, their welcome was conditional.  The Alien Act of 1965 contained stipulations clarifying the rights and duties of all immigrants and migrants, and the conditions for their being allowed to stay.  Also included were laws regulating   However, these stipulations were often quite vague, leaving many decisions to the Ausländerbehörde (Foreigners Authority).[6]  Additionally, some of the grounds for expulsion of foreigners were “begging, pursuing prostitution, wandering and vagrancy.”[7]

[1] Sebastian Braun and Toman Omar Mahmoud, “The Employment Effects of Immigration: Evidence from the Mass Arrival of German Expellees in Postwar Germany,” The Journal of Economic History 74, no. 1 (March, 2014), 98.